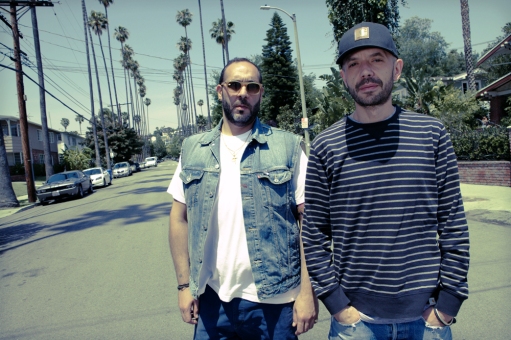 Let’s break down the name System of Survival for a moment- System, meaning a group of related parts or people that move or work together… and Survival, the continuation of life or existence. So here we have a group, moving and working together in continuation of this life’s existence, and in this case, the group is made up of Pietro ‘Bingo De Lisi and Alex Carpentieri, while life’s existence lies within the music, sharing with everyone along the way. They have been the resident DJs for Ibiza’s underground Circo Loco, since the party began over a decade ago, blending styles seamlessly that move not just bodies, but souls.  The years can sometimes weigh upon the essence of who we are, but these guys keep the child within ever present and ready to have a good time.  We were lucky enough to do this interview with them and hear them talk a bit about it while also providing us with an exclusive podcast that’s great for any weekend beach party, drive up the coast, intimate dark club with that special stranger or just chillin at the house.  Enjoy!

Questions & Answers with System of Survival:

Pietro and Alex, how did you guys meet and eventually come to form this duo called System of Survival?

We both come from Salerno where, at that time, we often met at the first house music parties. There were just a few of us, there started the friendship. The musical project has been the natural evolution of the spontaneous sharing of a passion.

Where did you guys grow up?

What’s one of your favorite things about Italy that you miss when you are not there?

More than being home, Italy is the most beautiful place in the world. But lately the country is going threw dark years. When you live in a foreign country you start missing more the land itself and a little less the people who live there.

What first brought you to Ibiza?  And eventually to where you are now, is that Ibiza or London?

For sure Circoloco. We have been invited to play for them the first time twelve years ago, and we are still today in the line up. The years passed as we got more attached to the island and then decided not to leave it. Lately because of the increasing number of gigs, it has brought uncomfortable changes. The amount of flights are limited during winter times. For the moment we are still here, in October we will bring up the problem. London, Barcelona, we don’t know yet.

I see you both have your own styles in the foundation for the sounds you guys play, soul & funk background versus a more Detroit/Chicago influence, what is your earliest influences with music and can you tell me more about how music brought you into the likes of DJing?

Music is a vocation, experience teaches you to listen first than to play. In this way the artist learns and settles his background. With the years our tastes have become always more heterogeneous and orientated to the quality of the product before the kind of music itself. We play what we love without minding too much of the “etiquettes” and we believe that there’s no “old” or “new” music.

What else in your life, besides music, keeps you inspired and you are passionate about?

What passionate us lives in us. It s a way of thinking, it goes the same for the lifestyle. Approach life in a certain way of living. We both skate. Bingo practices swim and paints, I for example make photos, but saying those things sounds very “hipster”, so it’s better doing it and not say too much. It seems like everybody paint, make photos and skate lately…

You guys have been resident DJs at Ibiza’s Circo Loco, since the party began over a decade ago, what can you tell us about your experience from that point till now? ——-What has changed in a good way, some changes that you miss, etc.

The terrace openair! However, it’s a complex question that emotionally touches us on many fronts and it would deserve it’s own interview. I will only tell you that it has changed a lot in 12 years. The scene has changed as well as the dj’s and clubbers. So has the club. Surely we have also changed.. but the energy remains the same. Unique.

In your opinion what creates a quality DJ set- or rather, what do you consider essential for your own DJ sets?

You have been doing your own releases through labels that you started IANVS71 and FVENTI, how has that compared to your release back in September on Ellen Allien’s, Bpitch records?

It’s the same thing, as I already told you we don’t take credit for “etiquette”. We do our music, as it comes, without interrogating ourselves too much about the market’s needs. We have a background since the beginning and it allows us to approach the production in an instinctive way. This has gratified a lot to produce of an album on Bpitch. They have let us do our music exactly as if it was released on our label.

What is the significance of those names that you created for your labels, IANVS71 and FVENTI?  I’m just curious.

The choice of the name comes from Bingo’s passion for philosophy and history. In ancient Roman religion, Ianus was described as a two face god, looking at the past and the future. He’s the god of beginnings and transitions. Even more he symbolizes doors, passages, endings and time.

The 71 is a long story to tell, it’s a reference to a common memory.

Concerning Fventi, it’s a place in the Amalfi Coast, very close to both our native place. There, was a club with the same name.. we use to go there in the 80’s. Then we loved the idea of a word that is pronounced the same in any language.

Anything new coming up that we should keep our ears perked for?

We just released an Ep on Rebirth, an italian label which makes us doubly happy. There’s also a track  on a compilation mixed by Michelle Owen on Moodmusic. Besides that, there’s an upcoming Ep on Bpitch. At the end of the season we’ll start working on the new album which should go out as soon as it will be finished.

What do you think is a necessary quality to have while producing music in 2013 that sets “you” apart from the rest?

The originality and the flow as we said before. Then if you want we can speak seriously about it, but you must give me a 6 page interview :)

What is something that you will never forget about your experience in the music world whether is be positive, crazy, ridiculous, inspiring???

We live at night over the last 20 years, in an environment that’s not exactly orthodox. If I sincerely answered you, you would have to censure me, believe me.